Powers:
ANIMAL CONTROL. Baron Blood is able to summon and completely control bats, rats, mice, and wolves. This power is Incredible in nature. A swarm of bats, rats, or mice arrives on the round following the start of his summons, and attacks any one area the Baron desires within four areas of himself. The swarm has the following statistics:

If a hero inflicts 38 points of damage on the swarm of creatures, it disperses and is gone. A swarm only attacks those in the area the Baron designates, and does Typical damage to everyone in that area every round. The swarm always gains initiative. Those leaving the area continue to be attacked (rats have Feeble and bats Typical Speed). If wolves are available, use the statistics for Guard Dogs in the Campaign Book, p. 30. Wolves, as above, only attack those within a particular area the Baron designates within a four-area radius of himself.

FLIGHT. Baron Blood is able to fly without transforming himself into a bat. He can move 6 areas per round in this manner, which may be a form of psionic levitation.

HYPNOTISM. Anyone looking at Baron Blood for longer than one round must make a Psyche FEAT roll to avoid being hypnotized by him and falling under his complete control. A Red FEAT is required if ones Psyche is less than Remarkable; a Yellow FEAT is needed if ones Psyche is Remarkable, and a Green FEAT if one has a Psyche of Incredible or better. Hypnosis lasts six rounds, but the Baron must not fight.

POISON RESISTANCE. Any toxic substance eaten or injected into Baron Bloods system affects him normally, but is not capable of causing his death. Assume that he always has at least 8 Health points left, no matter how large a dose of poison is given him.

REGENERATION. Baron Bloods regenerative powers are Unearthly in nature, allowing him to recover up to 100 Health points at the beginning of each round. He loses this power in direct sunlight. This power does not operate against certain attack forms described below and cannot be used to regenerate lost limbs.

VAMPIRIC BITE: If Baron Blood is able to make a Red FEAT roll on the Grappling table, he can bite his held victim and drain him or her of blood. The bite inflicts Typical damage every round, but if the hold isnt broken before the victim dies, the victims body will arise in three days as a vampire. Anyone who suffers a loss of over half his or her Health to a vampire’s bite will develop into a vampire in 2-20 weeks, being under the complete influence of the attacking vampire until then. The lost Health cannot be recovered. Note that aliens, robots, androids, and nonhumans cannot become vampires and cannot be drained of blood in this manner.

WEATHER CONTROL. Baron Blood can control weather with Remarkable ability; he can be assumed to control all the weather upon any particular campaign map that he occupies. Fog reduces visibility to a one-area radius around a character. Heat waves and cold snaps would cause Feeble damage to everyone with an Endurance of Typical or less. Baron Blood can summon lightning once per three turns (Remarkable damage), cause winds of Remarkable strength (forcing heroes with Excellent flight or less to land or crash), or produce rain, hail, or snow for five rounds.

VULNERABILITIES. Though he is an exceptionally powerful vampire, Baron Blood has certain vulnerabilities that are common to all such creatures. He can tolerate brief periods of sunlight (up to half an hour) without harm, due to cosmetic surgery performed upon him by Nazi scientists. If he remains in sunlight beyond this period, his FASE scores suffer a loss of one rank each for every two rounds he continues to stay in direct sunlight (to a minimum of Poor). When all of his scores reach the minimum of Poor (Health = 8), he disintegrates in the following round and turns into dust. Unless the dust is scattered (which will permanently destroy Baron Blood), the dust will mystically reform into the Baron in five rounds, once placed in darkness.

Baron Blood must satisfy his craving for fresh blood at least once every other day. Though most vampires become comatose in daylight, Baron Blood is able to operate normally during the day. He must spend some time asleep, however, in a coffin filled with soil from England. Unlike other vampires, Baron Blood cannot shapechange due to his operation.

Baron Blood will not come closer than one area to anyone who wears garlic or holds aloft a religious symbol in which the bearer has faith. The touch of a holy symbol wielded by a true believer causes damage equal to the attacker’s Psyche rank. Baron Blood avoids mirrors, though they cause him no harm, because he casts no reflection in them. His image cannot be captured on photographic film.

Weapons made of silver or wood cause Baron Blood great pain, and he actively avoids combat with anyone using such devices  even fleeing if necessary. Running a wooden stake or silver blade into his heart (a Red FEAT on the Hack-&-Slash chart) instantly slays the Baron, but removing the weapon from his body causes him to come to life again, even if his body has fallen into dust. This process takes only five rounds. Baron Blood cannot regenerate damage from a heart strike until the weapon is removed. Beheading the Baron (requiring a Red FEAT roll with a large bladed weapon and at least Excellent Strength, using the Hack&-Slash chart) also kills him.

Talents: Baron Blood has Excellent Reason in matters of the occult.

Background: Baron Blood was a member of the British aristocracy, a young nobleman who sought the tomb of Dracula in hopes of reviving and controlling him. Unfortunately, Dracula bit and killed Lord Falsworth, turning him into a vampire. Lord Falsworth was sent to Britain before World War I to wreak havoc, and he became an assassin for the Germans, killing many high-ranking British leaders. Wounded by the first Union Jack, Baron Blood (as he was code-named by the Germans) fled. He made contact with the Nazis during their rise to power, was operated on to gain special powers at the cost of his other abilities, and returned to England. He again started a reign of terror, which was ended by the Invaders and Union Jack. He was resurrected, however, and joined the Super-Axis cause. Baron Blood has no compunctions about killing and is an inhumanly evil foe. He hates British figures, especially those of the aristocracy 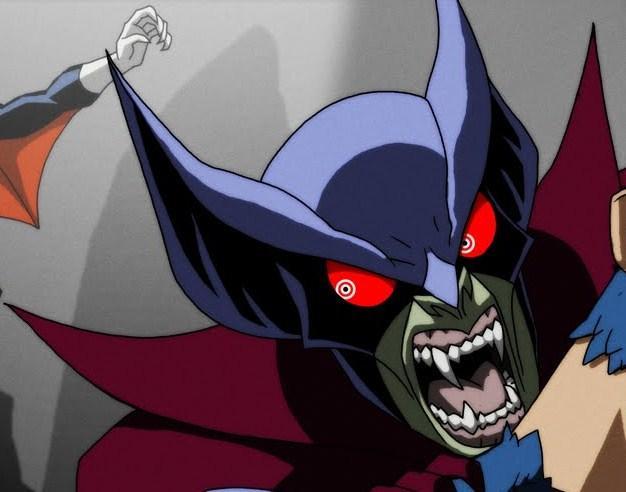