The hero can detect and identify magic and its effects. The Power can detect both magic in actual use and in potential. As such, this is another way to detect mutants, although it cannot differentiate them from normal magic-users. The hero can identify the past use of magic (a green FEAT), a yellow FEAT identifies the magic-user, and a red FEAT identifies the actual spell.

This is a combination of Resistances and Body Armor. The hero is immune to any physical harm, up to her rank’s limit. The immunity includes the following resistances: fire, heat, cold, electricity, radiation, corrosives, disease, poison, brute force, sonics, and kinetic bolts. The rank of the Invulnerability reduces the rank of the attack form. Example: A Mandroid’s Excellent laser would do only Feeble damage against Good Invulnerability, and none at all against Remarkable Invulnerability. The hero with this Power is still vulnerable to magical and mental attacks.

The hero’s appearance is not affected by this power; she appears to be a normal member of her race.

The hero has increased resistance to any vampiric-type attacks. Such attacks include forms of Psi-, Bio-, Energy, Magic, and Power Vampirism. The hero can ignore any vampiric attack whose rank is less than this Power’s rank. She can reduce the effectiveness of the vampire’s attack by deducting her Power rank number from the vampiric attack’s Power rank. The hero also cannot be turned into a vampire.

Elsa is the daughter of Ulysses Bloodstone, immortal mercenary monster hunter. She lives in Bloodstone Manor with her father, who is cold and distant to her. She is a monster hunter like her father, and potentially has the ability to be immortal like him as well. She wears a fragment of her father’s Bloodgem on her neck as a choker. 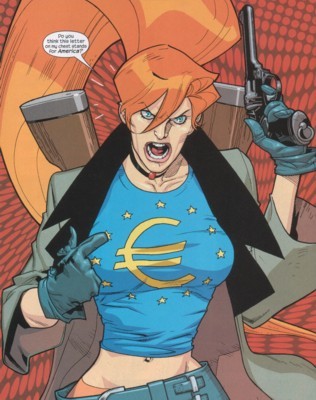