Agent of S.H.I.E.L.D. and head of the Invaders Initiative

James Woo is an Asian-American FBI agent assigned primarily to investigate and apprehend the Chinese-national mandarin known as the Golden Claw. Woo is the FBI agent assigned in 1958 to oversee the the Invaders. During that time, he was injected with an experimental variation of the super-soldier serum in order to save his life, giving him longevity but none of the physical enhancements.

Several years ago, he led a secret raid of a group identified as The Atlas Foundation. Going AWOL and taking several other willing agents with him, he infiltrated an Atlas Foundation location. He discovered that it was run by the Golden Claw, who reveals that the whole ordeal was only a test. As Woo passed it flawlessly, he commits suicide, ending his long life and granting to Jimmy Woo his role as Head of the Atlas Foundation. As a result, he retired from the FBI.

He was approached by S.H.I.E.L.D. to act as a liaison to super-powered individuals, a similar role as the one held by Agent Phil Coulson, but focused on more “off the books” operations. Eventually his work is given the code name “The Invaders Initiative.” 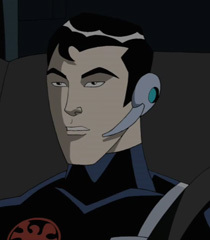