Body Armor: Jacqueline is much more resistant to bodily harm than is a normal person. In essence she has this useful power at Good (10) rank, which provides her the following resistance to the various attack forms:

Enhanced Lower Body Strength: Jacqueline’s leg strength was enhanced during the odd circumstances that gave her powers, boosting her legs’ applicable Strength rank to Remarkable (30). This allows for her super speed, but can also make for quite a mean kick!

Super Running: Jacqueline can run at Good (10) ground speeds (60 m.p.h.). As such, she can traverse up to eight areas in one combat turn. When running at super speed, Jacqueline leaves a trail of fire behind her. This fire inflicts no damage, but looks very distinctive.

Speed Suit: this synthetic, stretch fabric suit protects Jacqueline from the air friction that results from her moving at great speeds; it does so at up to Amazing (50) rank. Combined with her natural body resistance, this enables her to survive various high speed incidents.

Snob: on occasion, Jacqueline demonstrates disdain for a person based on their social status. This sometimes makes it difficult for the ‘unwashed masses’ to get along with Jacqueline, who react to her as if her Popularity were -2 CS less than it actually is (save for other snobs).

First Aid: Jacqueline has been fully trained in first aid techniques. She can immediately halt the loss of Endurance ranks in a dying body, helping them to immediately recover one rank of such, or even stabilize someone who hit Shift 0 Endurance within the last five rounds.

Martial Arts types A and B: Captain America and Union Jack 1 trained Jacqueline in the fighting arts, making her much more effective with her powers. She makes unarmed attacks at a +1 CS, and can inflict Slam or Stun results regardless of her comparative Strength or Endurance.

Piloting: Jacqueline has demonstrated her ability to fly an airplane on multiple occasions. She knows how to fly just about any plane from the 1940s and before, and makes applicable Agility FEAT rolls concerning the operation of aircraft at +1 CS.

As a member of the Invaders, Jacqueline can easily rely upon that team of heroes for aid, should she need to. Also, as an Invader, Jacqueline is also an honorary member of the Liberty Legion, and can count them as loyal allies.

Jacqueline adventures in a yellow stretch fabric body suit, though she also wears red boots and gloves, with a mighty red cape. She also wears a red half-mask, a mask that covers her eyes and frills out past her head.

Though not as arrogant as some of the upper class of Britain, Jacqueline nonetheless has a slight twinge of snobbishness in her. This doesn’t stop her from fighting for her nation or her ideals, however, which she will readily do with unrivaled optimism and cheer.

Jacqueline is an altered human, having developed powers after a reaction to two dueling, mutagenic substances in her blood: the vampiric ichor delivered by the bite of Baron Blood, and the Horton cells acquired in a subsequent blood transfusion by the Human Torch.

Daughter of the original Union Jack (from World War 1), Lady Jacqueline Falsworth first came into prominence during World War 2 as a member of Britain’s Home Guard, when she was viciously attacked by the evil Baron Blood (who, though neither knew it, was her uncle).

Before any real damage could be done, Jacqueline was rescued by the Human Torch, who took her home after her ordeal. While there, he befriended both Union Jack and his family, and was present when Baron Blood struck again, kidnapping Jacqueline for befriending the Invaders.

By the time the Invaders freed Jacqueline, she had lost a severe amount of blood due to Baron Blood’s vampiric attack. Taking her to a hospital, the heroes got her an emergency blood transfusion from the Human Torch, at which point the Blue Bullet attacked the hospital.

He was looking for the Invaders, in order to crush them with his shiny new armor. While this battle took place, Jacqueline’s body had a mutagenic reaction to the combination of android cells and vampiric ichor in her blood, and she developed the power to move at incredible speed.

Feeling up for a fight, Jacqueline raced to the battleground below, and saved the Torch from Blue Bullet’s rampage. After the battle, Jacqueline managed to completely recover from her injuries, and donned the costume and identity of Spitfire, after the British attack planes.

Valuing her company and her fighting capabilities, the Invaders adopted her as one of their own. Soon to be joined by her brother Brian, who had donned her father’s old Union Jack identity, Jacqueline fought evil alongside the Invaders for most of the duration of World War II. 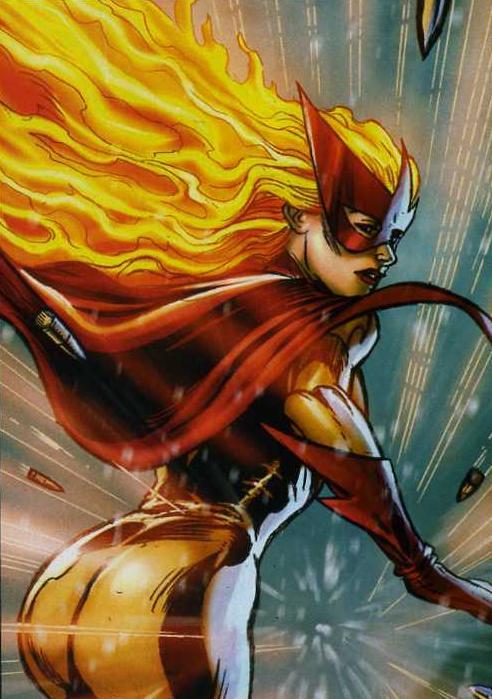