Symbiote: Agent Venom’s powers are derived from an alien symbiote bonded to him. Characters may try to attack the symbiote itself at -6CS. It has Remarkable (26) resistance to attacks and has 30 points of health. It recovers 6 points every round. If below 0 it becomes unconscious for 1-10 rounds

Webbing: Amazing (46) strength webbing that sticks to material with Incredible (36) strength, he can manipulate it as if it was his own body. If separated from Venom it dissolves in 1d10+5 minutes. Venom can also swing at 3 areas/round

Camouflage: +2CS when to blend in with surroundings.

Multi-Gun: Capable of transforming from a sub-machine gun to an automatic rifle as well as a sniper rifle. The weapon does 10, 15, and 20 damage respectively.

Regeneration: Typical (6): While bonded, the wearer regenerates hp equal to the power per round.

Natural Weaponry: Amazing (46) edged damage with fangs and claws in cases where the symbiote is in control.

Hyper Strength: Strength +2 CS when the symbiote is in control.

Sonics and fire do +2CS damage.

Alcoholism: Flash had been known to have a drinking problem.

Symbiote dependency: Because of sustained bonding with the symbiote and the effects of the drugs he uses to keep it in control, Flash’s biology was modified to the point he depends on the symbiote to live. If Flash doesn’t possesses the symbiote for a prolonged period of time, he could die.

The wearer must make red roll to control the symbiote after it has gained control.

Eugene “Flash” Thompson was a former classmate of Peter Parker. Flash grew up in Forest Hills, Queens, New York. He lived only a few blocks from Peter’s house. He lived with his father Harrison Thompson, a police officer in the New York Police Department, his mother Rosie Thompson and his little sister Jesse. Flash was physically abused by his alcoholic father, leading to Flash’s own violent, bullying nature.

By the time Flash left college to join the army, he and Peter parted as friends. During his tour of duty, Flash was stationed in Southeast Asia, where he stumbled across a hidden temple whose residents – notably the beautiful Sha Shan nursed a wounded Flash back to health; however, after American forces mistakenly shelled the temple despite Flash’s efforts to protect it, Flash left the army to return to America, where temple survivors who mistakenly blamed him for the tragedy made attempts on his life. With the aid of Spider-Man, Flash lived to convince the temple survivors of his innocence, and was briefly reunited with Sha Shan.

Flash returned to the battlefield in the war in Iraq, and lost his legs after saving his partner from enemy forces.

Flash became the new Venom when he was enlisted as a part of Project Rebirth 2.0. Flash was bonded with the symbiote, recently acquired by the U.S. government after Venom was “destroyed”. While bonded, Flash was able to reproduce his legs and had powers comparable to Spider-Man.

Thompson is assigned to SHIELD as a special operative tasked with subduing and bringing in rogue superhumans. He is currently assigned to guard duty at the Fridge in Alaska. 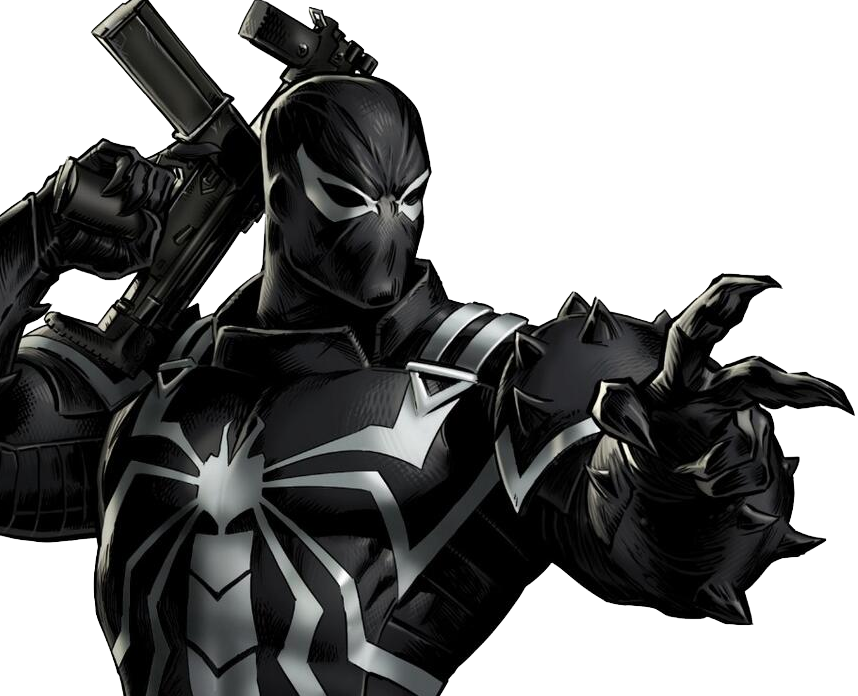